The Dark Lantern of the late 19th Century

These lanterns are mentioned often in the Dark Lantern Tales novels (available on this site). Hopefully this article will help the reader understand more about this iconic piece of equipment.

For the short version, enjoy this video! Read on for more details.

Ordinary things can be hard to research because they were originally so common as to be taken for granted. The standard “flashlight” of the late 1800s is a good example. Many types of lanterns were in use during that time, but one was essentially standard for the police, military, and watchmen. Scroll down for a gallery of dark lantern images.

Most lanterns shed light from the time they are lit until they are extinguished, but “Dark” lanterns can show or hide the light from their wicks as the operator chooses. Beginning hundreds of years ago, some lanterns were made with doors and other devices to allow or block the light they could shed. By the 1850s, a basic design appeared that became standard for nearly another century. These were variously called Dark Lanterns, Police Lanterns, or Bullseye Lanterns. Up to about the 1950s there was a version called a Boat Signal Lantern that operated much like models from the 1850s.

Typical dark lanterns were about the size and shape of a small modern thermos bottle, and had a fount for oil in the bottom. A cap with a wick (or wicks) was mounted directly to the top of this reservoir, and in most models the cap also served as a port to fill it. In the cylindrical body of the lantern, a shutter could be rotated to block light from coming through a large “Bull’s Eye” lens on the front. At the top of the lantern was a vent that allowed exhaust from the flame to exit but retain the light. These distinctive vents were usually made with two metal disks that were stamped into flutes that taper to the middle. The effect is sort of a ruffled top to the whole device. At the back of the lantern were wire handles to protect the user from the hot sides (policemen and watchmen kept them lit for upwards of six hours while on patrol), and usually a clip to hang the lantern on the user’s belt. There are anecdotes that describe patrolmen keeping a lit lantern on their belt beneath their great coat to stay warm in very cold weather.

These lanterns were made of sheet steel or sheet iron, and plated with tin. The least expensive and most common finish was “Japanning,” which was a lacquer made from a concoction of tar and baked to a shiny brown or black finish. More expensive lanterns were polished tin, or brass.

The earliest images of a dark lantern that this writer can locate date from the American Civil War. A fairly standard lantern was located in the Confederate submarine Hunley, and that lantern has now been conserved from the lump of rust and other concretion in which it was found. The Hunley sank in 1864 and was finally recovered 136 years later. A link to the Hunley artifacts site is at the end of this article.

Another Civil War image of dark lanterns also involves the Confederate forces. This illustration portrays troops in the dark with two lanterns and is on the front page of an 1862 Harper’s Weekly. The original is a wood engraving made after a Winslow Homer drawing.

Dark Lanterns can be found with flat wicks, dual round wicks, and single round wicks. Later models tended to have more elaborate flat wick burners and usually used kerosene. Whale oil (the best type was called “Sperm” oil) was the original fuel to use with the dual round wicks. Later, a less expensive alternative called “Signal Oil” was developed to work with the same wicks. Signal oil was made with various recipes from a combination of kerosene and lard, or sometimes vegetable oil (called “fruit oil”). There were also flat wick burners made for signal oil. Flat or round, many of the metal sleeves for the wicks had small openings in the side to allow raising the wick by using a stylus called a “pickwick.” Whale and signal oil could be nearly solid in cold weather, so the sleeves on wicks used for those oils extended down into the fount as a way to distribute heat and melt the oil. Most burners for kerosene had wicks that could be raised by turning a small knob, and the Adams & Westlake lantern shown on this page is an example.

Dark lanterns were used by police forces in both America and in England, and the standard design may have come originally from England. British lanterns are often of heavier construction, and some have three of the fluted vents on the top.

The shutters could be closed by any of several methods, depending on the lantern design. The simplest design, seen on lanterns made over many years, was to make the shutter part of the top, so an operator could rotate the top to open or close the light. When open, the shutter serves as a reflector behind the wick, and some of the lanterns that operate by turning the top can be easily disassembled for cleaning by pulling the top up. Again, the Adams & Westlake lantern illustrates this design.

Another common design controls the shutter with a knob in a slot at the bottom right of the lantern. Pushing the knob around to the front of the lantern closes off the light.

In 1886 a design was patented for operating the shutter with the thumb of the hand that held the lantern. The implications for one-handed operation meant that the other hand could open doors or hold a weapon. Dietz, an American maker of high quality lanterns, began selling this design in 1888 and marked them “Police Flashlight.”

Pocket dark lanterns were made in several designs, and both the Joe Phenix and Nick Carter stories mention these. Dietz made a pocket lantern with a decorative finish and a door in the front. Advertisements of the time (ca1890) show it clipped to the breast pocket of a gentleman’s suit in darkened surroundings to help him read a newspaper. A smaller lantern design in this writer’s collection has a single wick and is more truly a pocket-sized dark lantern type that would fit the description in these detective stories. This image shows this compact lantern between two other types.

Battery technology evolved and in the mid 1890s the first portable electric lanterns were offered for sale. However, the simple and reliable oil lanterns continued to be used for many years. Dietz in particular continued to make oil-burning dark lanterns until at least the late 1920s. In London, the Metropolitan Police converted to electric lanterns, reportedly with some reluctance, in the 1920s. But rural America was still not fully electrified and in small communities, a simple lantern fueled by easily found oil might have engendered more confidence in a policeman than a lantern powered by a battery.

The dark lantern design still had a viable place on boats into the 1950s. Made by Perkins (Perko), boat lanterns evolved to have Fresnel lenses and many can be found marked as “Boat Signal,” or “Boat Lantern.” These operate with the familiar knob near the bottom and could be a used as a slightly awkward signal light.

Few of the old dark lanterns that can be found today have the original finish. These lanterns were tools, and when they rusted somebody painted them. When the burner was lost, a different replacement was found, or someone stuck a candle into the opening. All practical things must pass (if they can) through a time when they are considered outmoded junk, and the few pieces that survive beyond that time may become desired as artifacts, or antiques. Most of the lanterns pictured here that are in the writer’s collection are preserved with their finish “as found,” so some of them have deteriorating paint over the deteriorating metal finish or lacquer. A couple of the lanterns have the original brown lacquer and this will give the reader an idea of how the others may have looked at one time.

Many thanks to The Friends of the Hunley for allowing me to use the image of their historic lantern in this article. https://www.hunley.org/artifacts/

A Dark Lantern with a mount to hold colored filters for signaling,

offered as a magazine premium in 1894.

W. T. Kirkman Lanterns may be able to make you an authentic, brand new Police Lantern. If anyone can, Kirkman can handle the job. Take a second to check out the rest of their catalog when you go to this site! 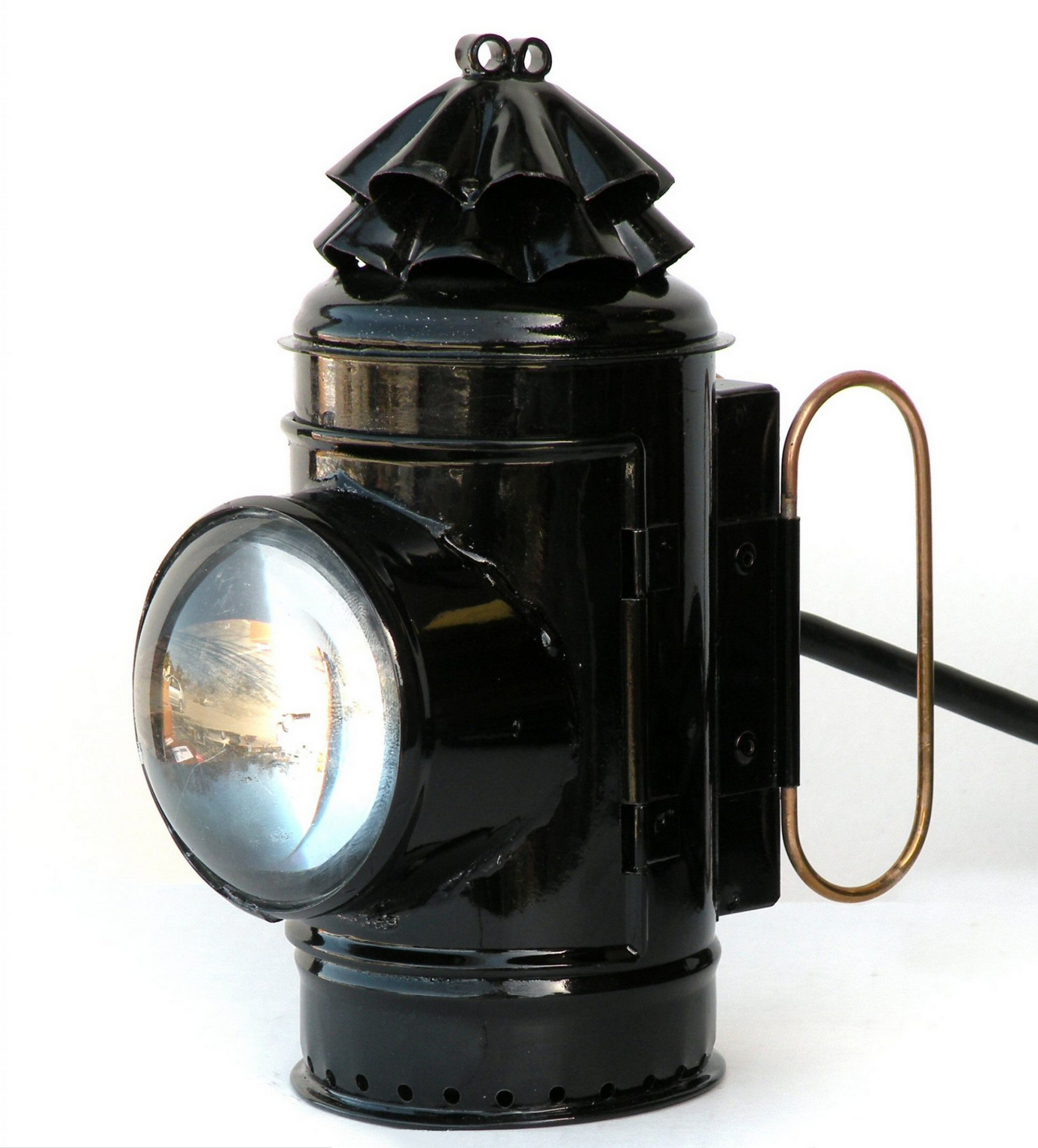